Buchu essential oil is extracted through the steam distillation of dried buchu leaves.

It should be noted that the essential oil derived from the two aforementioned varieties of buchu are toxic in nature. As such, they are not used for aromatherapy. Also, the use of buchu essential oil, either internally or externally, should be carried out with care and caution.

Below are various benefits of buchu essential oil;

Buchu essential oil has anti-rheumatic and anti-inflammatory properties which can help to reduce arthritic pains. The oil works by removing uric acid and other toxins hence relieving the pain. It is highly recommended due to its diuretic nature. Both the round leaf buchu and the oval leaf buchu have the same properties though with slight differences.
(https://www.ncbi.nlm.nih.gov/pubmed/9924759)

Stomach ache, nausea, indigestion, bloating, gas pains and flatulence are some of the common problems we suffer in our digestive system. Buchu essential oil effectively helps to remove excess gas from the intestines. Thus, it is of great benefit in relieving these problems. It is commonly used as a treatment for several stomach or intestinal illnesses. Buchu essential oil serves as a natural reliever of these stomach problems.
(https://www.ncbi.nlm.nih.gov/pubmed/9924759)

3. Used As An Antiseptic

Wounds and cuts can be protected from getting infected, by germs, by using buchu essential oil as an antiseptic. The oil has unique properties that impede infections from getting into wounds and cuts. The oil has potent constituents that help in preventing wounds from getting tetanus or becoming septic. The buchu plant has been in use as an antiseptic since the 17th century by the indigenous people called Khoisan.
(https://www.ncbi.nlm.nih.gov/pmc/articles/PMC6272985/)

Despite being toxic in nature, this oil has the ability to enhance proper body functioning. Buchu oil normalizes metabolic rates of the body and protects the body from infections. The oil is usable as a health tonic. Therefore the buchu essential oil helps to maintain a healthy life. It should be consumed regularly but with caution.

Digestion is a very crucial process in the body which plays a major role in the health of a human being. Buchu essential oil can be used for digestion purposes where it promotes healthy digestion in the body. It works as a catalyst in the secretion of digestive juices in the stomach which facilitate food digestion effectively and efficiently. The oil also kills harmful bacteria and microbes which could cause indigestion and other stomach upsets.

Contrary to the tonic purposes of buchu oil, it is also toxic naturally. This toxic nature of buchu essential oil makes it a natural insecticide to kill bed bugs, lice, fleas, mosquitoes, flies and other insects or parasites. The oil should be used in small quantities with the aid of an expert due to its toxic nature. Also, pregnant women should avoid the usage of this oil.

Buchu essential oil has the ability to remove unwanted and harmful substances from the body. They include; excess salt, excess fat, excess water, and uric acid among others. This helps to keep urinary tracts and the kidneys in a healthy functioning state. This aids in increasing urine, both in quantity and frequency, which facilitates the removal of waste products from the body. As such, this oil is a natural detox agent by itself due to its diuretic properties.

Round leaf buchu alongside the Oval leaf buchu, which is botanically known as Agothosma crenilata, are beneficial in the treatment of cold and cough. They have components such as; trans acetylthiol, cis acetylthiol, iso pulegone, iso menthone, menthone, pare-diosphenol, and limonene. Buchu oil is rich in these components which all have medicinal value.

It has been used since the 18th century in treating coughs and cold. Buchu products were only accessed by bourgeoisies in the early days of South Africa due to its high cost but today it is commonly used by a large percentage of people.

Buchu essential oil is used in massages because it has soothing constituents that relieve joint pains, muscle pains, and muscle stiffness. Buchu oil also helps in reducing the inflammations that occur in joints, muscles, and tissues. This is crucial because stiffness and pains are ill-health conditions of the body. Affected areas should be massaged several times a day for more than four weeks to eradicate the problem.

Perfumes are also made from buchu essential oil due to its aromatic scent. The oil has black currant and a minty fragrance. The perfumes made from this oil are not too strong to cause headaches but are sweet-scented.

Sun rays, when in excess, can damage the skin. There are photoprotective qualities in buchu essential oil which helps to prevent ultraviolet light from damaging the skin. Thus, the oil acts as a natural sunscreen.

Agothosma betulina (round leaf buchu) has its main constituents as iso menthone, cis mercaptone, iso pulegone, diosphenol, limonene, pare diosphenol, pulegone, trans mercaptone, and menthone. These components are useful in facilitating the breakdown of substances. Obese people or people who need to lose weight can use this oil for about four months because of its ability to increase one’s metabolic rate. It helps to burn excess fat and glucose in the body thus it’s beneficial in the weight-loss process.

Buchu stems and leaves are allowed to steep in brandy to make buchu tincture. Buchu was used by indigenous settlers of South Africa to make Boegoebrandewyn (buchu brandy). It is still used today to treat a hangover.

Buchu vinegar is made through the process of infusion similar to buchu tincture. Buchu vinegar can also be applied externally to aid in the healing of wounds.

Word Of Caution
Buchu Essential Oil is toxic in nature. Thus, it should only be used in mild doses. Also, avoid using this essential oil if you are pregnant. 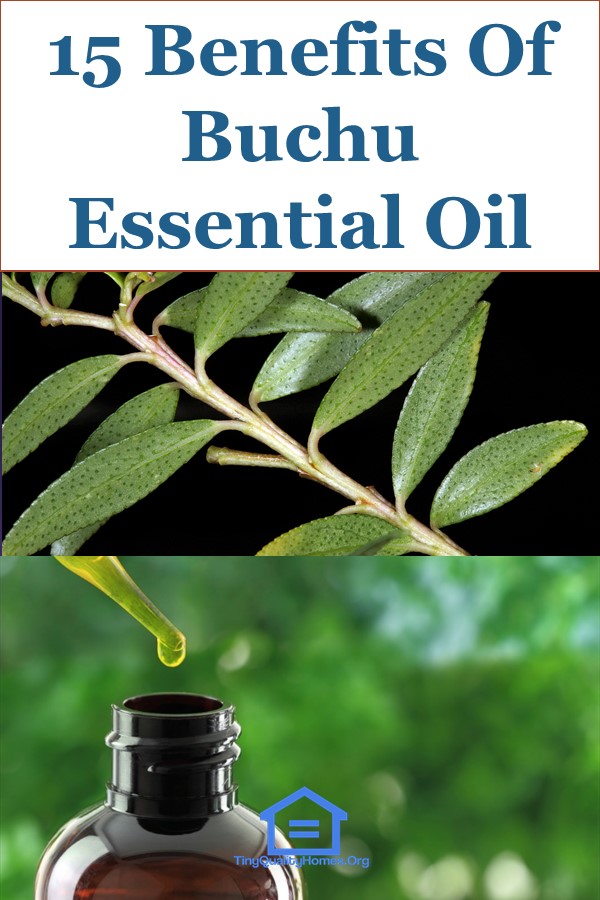