Anise oil is obtained from the steam distillation of anise (Pimpinella Anisum). This distillation yields a volatile thin oil in which anethole is the main constituent. Anethole is responsible for the anise oil’s characteristic aroma.

The medicinal and therapeutic benefits of anise have long been known by the Romans, Greeks, and Egyptians.

Anise has long been used as a spice and flavoring agent in numerous recipes. It is even used to flavor beverages including alcoholic beverages such as liquors.

Below are various health benefits of anise essential oil;

1. Anise Oil Is An Excellent Antioxidant

Choosing Anise essential oil for its antioxidant properties is one of the best things you can do for your body. The level of toxicity that the body is exposed to is getting higher every day and it is essential for our well-being to purify our body from any toxic waste. Researchers from India, in 2007, came to the conclusion that anise has potent antioxidant properties. Over the years it is proven that anise oil is an excellent supplement not only for preventing cancer but also for protecting the heart.
(https://www.ncbi.nlm.nih.gov/pmc/articles/PMC5618098/)

Anise oil consists of some compounds that stimulate the body’s natural hormone and enzyme production, thus ensuring and increasing our metabolism. Since anise has potent detoxification effects in our body, it is used for maintaining and boosting our body’s strength and immune system.

4. Anise Is Very Good For The Heart

Many studies have proven that anise oil improves your heart function and blood flow. This also makes anise oil important for oxygen transfer to the brain and other parts of the body.

5. It Helps You Overcome Cough

If you are suffering from a cold or you caught-up a virus that has you pinned down to the bed, adding few drops of anise oil, in your water or tea, can significantly boost your health and inhibit a sore throat. Furthermore, numerous teas and baby supplements already have anise added to them. Therefore, it is readily available in numerous baby products.

Since anise oil has a calming effect and huge benefits for respiratory and heart-related issues, in huge doses it is used for overcoming hysterical and epileptic attacks and seizures. It also gradually decreases the intensity of an occurrence. It also calms nervousness and hyper-reactions.
(https://www.ncbi.nlm.nih.gov/pmc/articles/PMC3416669/)

7. It Heals Your Wounds Faster

If you often get wounds, cuts, and bruises and want a quick healing, applying anise oil creates a protective layer that keeps out all germs and bacteria from infiltrating your wound. Anise’s antiseptic properties are very beneficial against sepsis and bacteria attack.

9. Anise Oil Relieves You Of Painful Headaches And Migraines

Anise oil is well known for its calming effects on the human body, whether it is orally introduced into the body or rubbed into the skin. Few methods, like rubbing anise oil, mixed with a small amount of a carrier oil, onto your temples, can help relieve headaches and migraines. Also, you can go ahead and enjoy the aromatherapeutic effects of anise oil by adding it into your oil burner.

Arthritis is a serious ailment which has to be dealt with great care and precaution. Arthritis affects a lot of before above the age of 40 years and its symptoms become gravely pronounced for a lot of people above the age of 50 years. Since anise oil increases blood flow and reduces cardio-vascular problems, it has great benefits in relieving rheumatoid and arthritis diseases. As such, rubbing anise oil onto the skin of affected area reduces pain when applied.

Anise oil improves digestion of food and regulates body’s immune system. Thus, adding 3-4 drops to your drink after a meal enhances your intestine functioning and reduces the toxicity of your body.

The human body is often exposed to harsh conditions of our surrounding. From extreme cold and heat to numerous viruses and bacteria. Thus, many of us get sick, some more often than others, but all of us, sometimes, get sick. Either, it is a flu or some virus — it affects us all and reduces our immune defense system. How fast you get well depends on your immune system’s strength. Anise oil helps in boosting your metabolism as well as your immune system. It also works as an expectorant in your body that loosens phlegm in the chest and help to inhibit the flu symptoms.

Difficulties in overcoming spasmodic conditions, such as muscle cramps, impaired blood vessels, convulsions- are things of the past when it comes to anise oil. Anise oil’s antispasmodic properties help you relax contractions of the muscles, blood vessels, respiratory tract, and nerves. Thus, enhancing your overall health.

14. Anise Oil Helps You Get Rid Of Excessive Gas

Excessive gas is a real problem when it gets trapped inside a human body. Some people think this isn’t a big deal, but if not dealt with from the onset, excessive gas can cause a lot of problems and damage to your health. Studies show that it can cause pain on the chest and stomach, indigestion, abdominal bloating, and even increased blood pressure. Introducing Anise oil in your body, especially orally with a glass of water, helps your body get rid of excessive gas.

POPULAR:  17 Benefits Of Artichokes For Skin, Hair, And Health

15. Anise Oil Is Also Used As An Anti-Fungal Remedy

Some of the studies in the middle and far east have shown that anise oil has some potent anti-fungal properties that help your body battle numerous infections as well as treating fungal infections.

Studies and anecdotal evidence have shown that insects are not bigs fans of anise smell. Mosquitoes, flies and other annoying insects are easily repelled either by adding anise oil into your oil burner or applying anise oil on your skin as a cream or body lotion.

17. Anise Oil Helps You Get Rid Of Intestinal Worms

Children, especially, are susceptible to intestinal worms of numerous kinds, and until the problem becomes pronounced, no one knows about it. Anise oil is here to show its insecticidal effects, both on the outside and inside of the body. Introducing every day, few drops of anise oil into the child’s body kills the parasites that a child has.

Anise oil is packed with lots of useful ingredients that benefit your entire body, but the one we are interested right now is the Anethole in Anise oil which is a galactagogue, a natural milk stimulant. Galactagogues help in stimulating milk for nursing mothers. In this case, anethole, found in anise oil, enhances the production of hormone prolactin which stimulates the production of breast milk. It is recommended in some parts of the world, for women who have troubles producing breast milk but only in small scales. Larger doses of Anise oil can have negative effects on the baby. Therefore, a doctor’s supervision and advise is necessary before trying this method.

19. Anise Oil As A Mouth Freshener

Adding 1-2 drops of Anise oil into a warm glass of water and using this water as a mouth rinse or gargle, kills numerous germs and harmful bacteria in your mouth and also helps mitigate bad breath.

20. Anise Oil Has Great Effects On Your Hair

Dandruff and hair falling affects us all from time to time. For some, it is just changing the brand of their shampoo and the problem is fixed but for others, this is the beginning of a nightmare. However, Anise oil could be used as an adjunct therapy for this problem. Adding anise oil on your hair and scalp results in an increase of your hair strength, quality, and growth. Anise oil also helps to inhibit infections of the scalp and keeps your hair clean and healthy.

Insomnia is a sleep disorder that manifests itself in several ways. It can manifest as a problem of getting to sleep, the problem of maintaining a full-length firm sleep, too early waking up or a complete lack of sleep. It affects over 54% of the American population. Insomnia affects your mood, concentration, multitasking skills, social skills, work efficiency, alongside an increase in nervousness and anxiety disorder symptoms. Anise oil is a potent antioxidant, and, due to its compounds thymol, stigmasterol, alpha-pineno, terpineol, eugenol, and linalool, relieves you of nervousness and anxiety. Anise oil can help treat insomnia and stimulate long and firm sleep.

If you are looking to boost your cooking recipes, adding anise oil is an excellent choice to consider. Mixing anise oil in your salad or sauce can add an exotic taste that you and your loved ones are surely going to like. Numerous recipes, using anise oil, can be found online so go ahead and search for them. You never know what you’ll find and like.

23. Anise Oil As A Great Fragrance For Your Home

If you are tired of every day’s standard smells of your kitchen soap, body lotion or clothes softener, using a few drops of anise oil would make a huge difference. It is very safe for the skin and has a beautiful fragrance that will calm your senses in a busy or boring day.

Anise oil has numerous benefits as an antioxidant and one of them is that it takes care of your skin. Anise oil helps protect against harmful free radicals and toxicity on your skin and makes the skin very smooth and elastic. Anise oil also helps in keeping your skin cells protected and gets rid of wrinkles and lines of premature aging.

25. Anise Oil As One Of The Main Ingredients Of Candy

Anise oil is well known for its great smell and distinguished taste. That’s why in today’s production of candy, anethole, one of the main constituents of Anise, is used as flavor of candy production.

26. It Is Also Very Beneficial For Your Dog’s Health

If your furry little friend is experiencing some respiratory difficulties, treating him/her with anise oil, in many cases, results in a boost of your dog’s health. 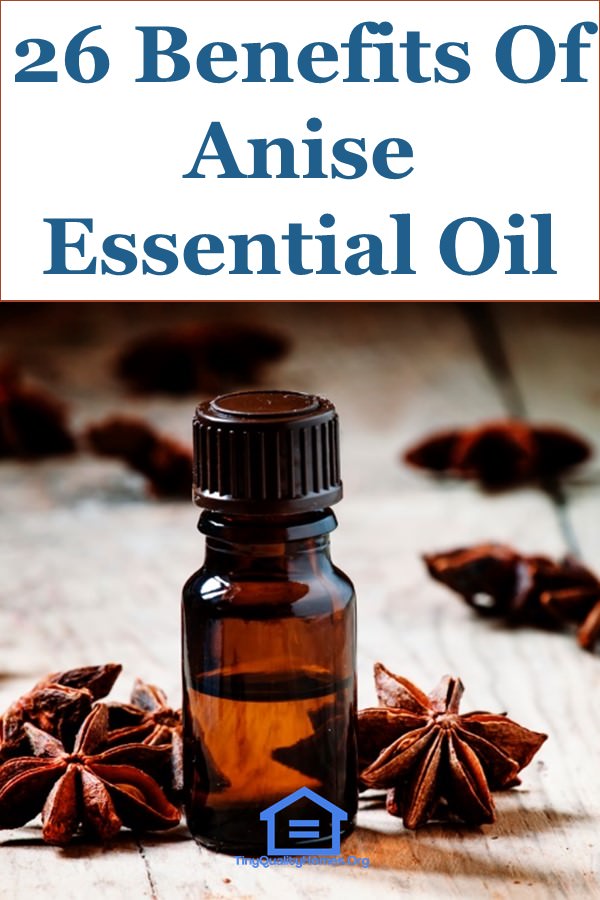