Apple cinnamon tea is prepared by brewing tea, cinnamon, apple peels, and other variety of tea into a nutritious beverage.

Apple and cinnamon have numerous nutritious and therapeutic properties. When combined with antioxidant-rich tea, the potential benefits increase.

Black tea is often used in making this tea and it is rich in numerous antioxidants. It also contains caffeine. The apple peels contain antioxidants, potassium, calcium, and vitamin C. Cinnamon also has antioxidants and other beneficial compounds, such as vitamins, minerals, and cinnamaldehydes.

Below are various health benefits of apple cinnamon tea;

Both cinnamon and apple are known to contain agents that reduce levels of triglyceride. These agents quicken cholesterol metabolism, thereby bringing down the general cholesterol levels, cutting general body fat and reducing the body weight.
(https://www.ars.usda.gov/news-events/news/research-news/2003/study-shows-tea-consumption-lowers-blood-cholesterol/)

The vitamins and antioxidants, along with good amounts of healthy dietary fiber, found in apple cinnamon tea ensure the smooth running of the digestive process by keeping stomach upsets and constipation at bay.
(https://www.ncbi.nlm.nih.gov/pubmed/9591193)

The cinnamon, in apple cinnamon tea, contains polyphenol, a component that is capable of regulating the levels of insulin in the blood, thereby keeping levels of blood sugar in check. This is a plus for diabetics who take this simple but potent drink.
(https://www.ncbi.nlm.nih.gov/pubmed/19930003)

The Vitamin B6 that is loaded in this drink greatly helps to offer much-needed support to epithelial cells, to facilitate healthy white blood cell production, helping your natural army of defense against disease to stay vibrant and always ready for action, keeping you healthy throughout and making you less prone to diseases.

The first trimester is usually a nightmare, with all the culprit hormone levels fluctuating and working against an expectant mother. Thankfully, the caffeine in the apple cinnamon tea mix is significantly low in the right amounts to help control these fluctuations and help soothe and calm her. You could also opt for a decaffeinated apple cinnamon tea to enjoy this benefit without the caffeine.

The antibiotic properties of cinnamon are beneficial in apple cinnamon tea. They reduce coughing, inflammations, fevers, and relieve migraines and headaches. Thus, helping to get rid of flu and cold, as well as helping you bounce back in shape in no time.
(https://www.ncbi.nlm.nih.gov/pubmed/30037024)

Consumption, on a daily basis, of apple cinnamon tea, especially as the first thing in the morning on an empty stomach, unlocks its diuretic properties that enable it to flush away toxins and harmful substances via urine while still keeping you hydrated.

This tea contains anti-clotting agents that promote smooth blood flow and circulation throughout the body. They also ensure the health of the heart as they prevent blood clots that lead to heart attacks and strokes that could prove to be life-threatening.

13. Prevents Cancer Of The Colon

The presence of dietary fiber in apple cinnamon tea is helpful in that it accelerates the removal of wastes, reducing exposure of the gut to toxins as well as acting as protection against oxidative stress for the cells lining the colon, preventing colon cancer.
(https://www.ncbi.nlm.nih.gov/pubmed/19476292)

Spike your cup of regular apple cinnamon tea with natural sweeteners, such as honey, and add a welcome boost of body energy all day long.

15. Serves as A Healthier Drink During Workouts

Apple cinnamon tea is the perfect workout drink that combines energizing and calorie-burning abilities as well as detoxifying properties to keep you hydrated, refreshed and energized.

The phytochemicals along with high potassium, sodium, magnesium, and vitamin C found in apple cinnamon tea promote healthy bones and keep them strong, thereby significantly reducing the risks of arthritis and osteoporosis as you get older.
(https://www.ncbi.nlm.nih.gov/pmc/articles/PMC5728912/)

Apple cinnamon tea has been proven to improve oral hygiene by keeping bacteria that cause gum disease, tooth decay and bad breath at bay, giving you a fresh, clean mouth that would save you trips to the dentist for a long time to come.

Yeast infections can prove very stubborn to get rid of as they are recurrent after short periods of time. The culprit is almost always Candida fungus. Thankfully, apple cinnamon tea has antifungal compounds that could, if taken consistently and correctly, effectively treat this stubborn infection and give much-needed relief.
(https://www.ncbi.nlm.nih.gov/pubmed/19420933)

The sweet, woody cinnamon scent of apple cinnamon tea has a relaxing, calming effect that is noticeably potent when your mood is down, especially after a stressful day at work or during menses. It has been proven to lift spirits quite rapidly.
(https://www.ncbi.nlm.nih.gov/pubmed/17891480)

Full-blown inflammation can give rise to several health concerns such as Parkinson’s disease, Rheumatism, heart disease, IBS, infertility, Polycystic Ovary Syndrome (PCOS) among others. Thankfully, a cup of apple cinnamon tea has anti-inflammatory compounds that have been proven to protect from inflammation effects.
(https://www.ncbi.nlm.nih.gov/pmc/articles/PMC3401676/)

Apple cinnamon tea contains potent phytonutrients and flavonoids that can be very useful in the prevention of macular degeneration, glaucoma, night blindness, blindness, and cataracts. They protect and strengthen your vision that is likely to deteriorate with age.

The consistent consumption of apple cinnamon tea reduces the risk of developing heart diseases. Furthermore, compounds in the tea promote circulation that keeps the heart fully functional. Manganese, also a component, maintains and supports the growth of connective tissues.

The stimulating effects of the cinnamon in the apple cinnamon tea causes an increased saliva and stomach acid production, making it easier for your digestive system to carry out its job. It inhibits gas and bloatedness, curtails the formation of stomach ulcers and fights nausea and vomiting. 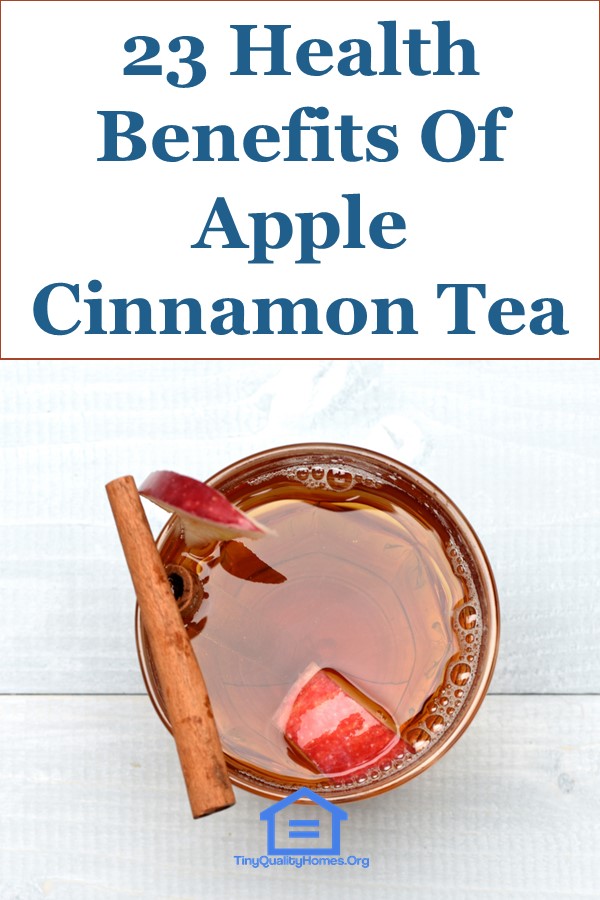