Artichokes (Cynara cardunculus) are known in their natural form as cardoon and are native to the Mediterranean region where they are often used in cuisines. Artichokes are also common in America, Europe, and Middle Eastern countries.

The edible part of an artichoke is the bud, within the flower head, before it fully blooms. The harvesting time of artichokes is significant as the bud hardens and becomes almost inedible when it has fully bloomed. Artichoke could also be taken as a tea or blended to a juice or smoothie.

Below are health benefits of artichokes;

Artichokes have higher amounts of antioxidants than most other vegetables. Some of these antioxidants in artichokes include rutin, quercetin, anthocyanins, cynarin, silymarin, and luteolin. Antioxidants protect the body from harmful free-radical agents.
(https://www.ncbi.nlm.nih.gov/pubmed/12926911)

Artichoke has compounds like cynarin and sesquiterpene-lactones that reduce cholesterol production and increase its emission in the bile, thus, reducing the overall amount of cholesterol in the blood. The fleshy tissue of artichoke leaves has a polyphenol antioxidant known as cynarin that increases bile flow.
(https://www.ncbi.nlm.nih.gov/pubmed/22746542)

Artichokes have some fat-fighting properties that make it a great vegetable to include in your weekly dining. Because it has a diuretic effect, toxins are quickly removed from the body. The artichoke, rich in nutrients, provides 16 essential nutrients, yet contains only approximately 25 calories per mid-sized artichoke. This vegetable is a good way to get the fiber you need so that you feel full and satisfied; it is also a great source of Vitamin C, which boosts your metabolism to help the body burn fats, and it provides folate, which aids in digestion. The key minerals; magnesium, manganese, potassium, phosphorus, calcium, and iron are abundant in each artichoke and offer healthy, fat-burning properties. The powerful antioxidant characteristics of the compound, silymarin, assist your liver in regenerating healthy tissue. Many of the phytochemicals found in artichokes are now being studied for their properties that help maintain health as well as ward off disease.

Artichokes contain cynarin and one more antioxidant, silymarin that is very helpful to the liver. They can even rejuvenate liver tissue. Artichokes are used as an alternative medicine for the treatment of liver diseases. Its natural qualities help the body remove toxins and helps the liver in its essential operations.
(https://www.ncbi.nlm.nih.gov/pubmed/29520889)

Artichokes assist the digestive tract. They are a natural diuretic; they support digestion and enhance gallbladder function. Moreover, artichokes are rich in fiber and hence, help improve digestion while avoiding constipation.
(https://www.ncbi.nlm.nih.gov/pubmed/25758164)

Artichokes contain a high amount of potassium, a mineral which is normally good for you. Potassium helps prevent excess sodium in the body. Potassium is a vital constituent of the cell as well as body fluids which assist in managing heart rate plus blood pressure by counteracting effects of sodium. It’s advisable for people taking some types of anti-hypertensive drugs to eat foods such as artichokes to avoid being potassium deficient.
(https://www.ncbi.nlm.nih.gov/pubmed/22435514)

Artichoke can assist stabilize blood glucose levels, and hence help prevent diabetes. Therefore, it’s recommendable for people with diabetes to eat foods on this side of the glycemic index. Substances found in artichokes, such as cynarin and inulin, help reduce the level of glucose in the blood. Also, artichoke has a very low glycemic index and large amounts of fiber.
(https://www.ncbi.nlm.nih.gov/pmc/articles/PMC3573897/)

Artichokes are good sources of vitamins, such as folic acid, vitamin C, Vitamin K, and vitamin B complex. Folic acid serves as a major component for enzymes entailed in the production of DNA. Moreover, good levels of folic acid in the body before conception and during early pregnancy prevent the development of neural tube defects in infants. Vitamin C assists the body to gain resistance against contagious agents. Vitamin K boosts development of healthy bone and prevents neuronal harm in the brain; hence, it’s advisable for people with Alzheimer’s disease to eat artichokes. Vitamin b complex is vital for optimal cellular metabolic functions.

POPULAR:  44 Benefits Of Neem Oil For Skin And Hair

Artichoke contains an ingredient called cynarin, which is liver protectant. It can also help the liver by stimulating the production and excretion of bile, improving the flow of the bile duct. Also, artichoke is often used as a diuretic for detoxification of the liver and other organs. Regular use can significantly improve liver and gallbladder functions. Artichoke helps increase the production of bile, thus, reducing the risk of liver disorders. On a normal basis, the liver produces about 800ml of bile a day, but the consumption of about half an artichoke can raise the amount to as much as 1,200ml. The bile secreted after eating artichokes is less dense and more fluid, thus decongesting the liver. Thus, it can be said that artichoke aids the detoxifying function of the liver in eliminating, along with the bile, numerous foreign and toxic materials circulating in the blood, including medications, additives, and other chemical substances.

Artichoke help in increasing the production of urine, which reduces the risk of kidney disorders
(https://www.ncbi.nlm.nih.gov/pmc/articles/PMC5669078/)

Cynarine (a component in artichoke) also helps in facilitating the emptying of the gallbladder. Moreover, artichoke is appropriate in cases of biliary dyspepsia provoked by gallstones or other bladder dysfunctions.

It has been shown and proven that artichoke helps in treating skin disorders, like in cases of dermatitis, eczema, and allergic skin reactions. The abundant consumption of artichoke can improve and even make these disorders significantly reduced.
(https://www.ncbi.nlm.nih.gov/pubmed/30360471)

15. Helps In The Prevention Of Birth Defects

If pregnant women consume a cup of artichoke tea on a regular basis, it would help prevent numerous congenital disability to the fetus in your womb.

16. Helps In The Treatment Of Joint Pains And Metabolic Diseases

2Artichoke is an excellent help in case of joint pains and metabolic diseases. If your hips hurt so much that you can hardly walk, the nutrients of artichoke may be able to help reduce your aches and pains. 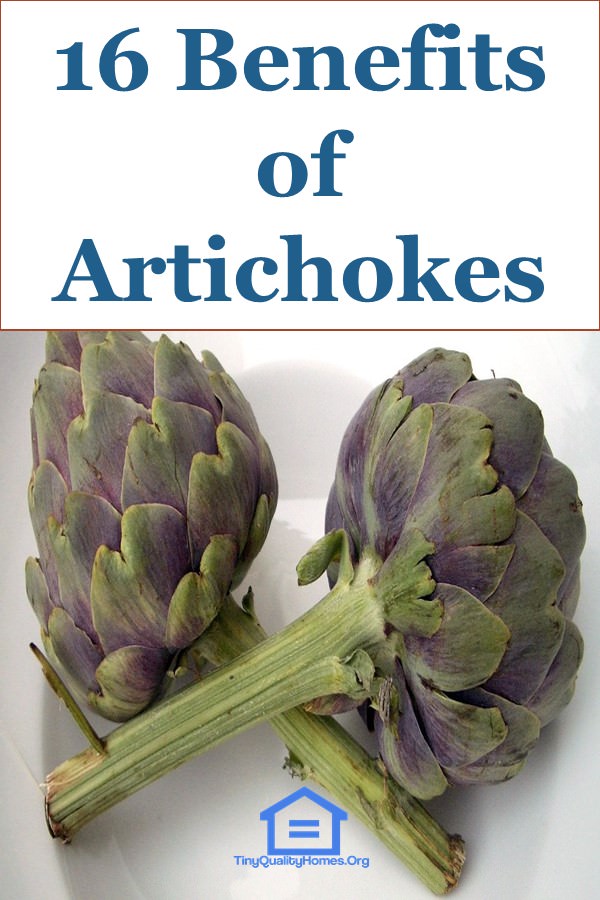