A typical ginger beer is naturally sweetened and carbonated. It is usually a non-alcoholic beverage produced through the fermentation of ginger, yeast, and sugar.

Ginger beer has been made for about 200 years and was popular in Britain and its colonies.

Below are the various health benefits of ginger beer;

The health properties of fermented ginger root are such that, when enjoyed regularly and/or right in between intense periods of stress or hard work, it can significantly help you improve your mental health. One of the main reasons for this is the fact that ginger beer actually functions as an aromatherapy of sorts, with its gentle soothing aroma always ready to calm you down and mitigate excess stress. Many people, in fact, recommend having a glass right before going to work, just because of how much better they feel overall during the day, and specifically, because of its beneficial effects on the mood and state of mind. Also, because it can contribute to preventing stress and depression, it certainly constitutes a benefit when it comes to mental health globally.

2. It Can Lift Your Mood

As mentioned, the characteristic aroma of fermented ginger root has been proven to be a powerful relaxant and mood enhancing element, particularly when enjoyed right before a work day or similar situation.

The anti-inflammatory properties ginger beer possesses make it well-suited for treating a variety of respiratory issues you may have. Among other things, it has the capability of cleansing your respiratory system of any remnants of mucus or other contaminants. In addition to this, ginger beer has anti-bacterial properties too, which are extremely effective for protecting the respiratory tract from numerous bacteria that might end up causing issues related to breathing.

4. It Can Boost Your Immune System

Ginger beer, considered by some as a superfood, has the power of inhibiting bacteria. Especially when consumed on a regular daily basis, it would help you fight off a number of infections, bacteria, and viruses. Therefore, it is a powerful remedy for aiding and repairing the immune system as a whole.
(https://www.ncbi.nlm.nih.gov/pmc/articles/PMC3665023/)

5. It Helps You Fight Off Infection

Because of the reasons explained earlier, ginger beer has the properties ideal for helping to fight off any potential infections. It even can fight and prevent fungal infections. Specifically, a substance known as gingerol (which possesses anti-inflammatory qualities), has been shown in studies to be effective against infections such as Streptococcus or Staphylococcus.

6. Helps You Prevent And Avoid States Of Depression

Due to its soothing qualities and aromatic effects, ginger beer can surely be of great help when it comes to enhancing psychological health. Thus, inhibiting negative mood cycles that could culminate in eventual depression. While not an antidepressant in and of itself, it certainly can help significantly when it comes to prevention or early treatment of such symptoms.

While not a suitable substitute for proper cancer treatment, as part of a natural remedy, consuming ginger beer will contribute notably to prevent the proliferation of potentially cancerous cells, due to its anti-inflammatory capabilities. Certain medical studies even suggested that it may be indicated as part of a treatment against such cancers as skin cancer, colon cancer, pancreatic cancer, breast cancer and many other types of cancers.
(https://www.ncbi.nlm.nih.gov/pmc/articles/PMC4369959/)

Detox is extremely crucial for the body, due to the large and varied number of toxins we ingest every day through our dietary habits and the air we breathe. These toxins, then, can ultimately lead to more serious health issues if left unattended. The powerful anti-inflammatory properties of ginger beer are perfectly indicated to help with the process of allowing the body to purify itself, thus improving overall health.
(https://www.ncbi.nlm.nih.gov/pubmed/12567940)

9. It Can Prevent Diabetes

Although it contains sugar (and this should be taken into account always), home-made ginger beer, particularly, contains active components that would help decrease your blood pressure over time. As it makes the body more sensitive to insulin, while at the same time inhibiting the metabolism of carbohydrates, it is very effective for preventing diabetes.
(https://www.ncbi.nlm.nih.gov/pmc/articles/PMC3519348/)

Proper circulation of blood around the entire body is critical for overall health, and any obstructions in the flow of blood across your body can constitute a serious risk of potential heart disease, stroke, etc. Ginger beer helps improve the quality of blood flow by relaxing your blood vessels, thus expanding them and allowing for better global circulation.
(https://www.ncbi.nlm.nih.gov/books/NBK92775/)

11. It Keeps You Hydrated

When consumed daily and in addition to water, ginger beer (which is made of carbonated water) is very well suited for keeping you properly hydrated during your daily activities. For this purpose, it is much more suitable than, for example, consuming tea or coffee, because caffeine actually tends to dehydrate the body. And the importance of staying well hydrated cannot be overstated.

POPULAR:  25 Benefits Of Alfalfa For Skin, Hair, And Health

13. It Reduces Inflammation Of The Body

Inflammation occurs as a result of the body being under attack by bacteria, fungi or a virus. As mentioned previously, the powerful anti-inflammatory properties of fermented ginger beer are ideal for inhibiting the aforementioned instances. As a resulting, leading to a decrease in inflammation across the body.
(https://www.ncbi.nlm.nih.gov/pmc/articles/PMC3665023/)

In addition to making your blood vessels relax and thus relieving blood pressure, ginger beer also has the power to warm you up and relax you overall. Ginger beer also acts as a powerful anticoagulant (helping prevent any possible clotting of blood within your circulatory system) All these reasons make it an ideal drink for increasing and improving the well-being of your heart.
(https://www.ncbi.nlm.nih.gov/pubmed/18037515)

15. It’s A Great Source Of Antioxidants

With our bodies being daily bombarded by harmful free radicals, which in turn can cause a variety of serious health conditions and illnesses over time, it is of paramount importance that we supply our bodies with the proper boost in antioxidants to combat this. Combined with a balanced diet and healthy lifestyle, ginger beer can certainly help boost your defenses against free radicals.
(https://www.ncbi.nlm.nih.gov/pmc/articles/PMC3665023/)

16. A Rich Source Of Probiotics

A byproduct of fermentation and yeast, probiotics play an important role when it comes to proper digestion. Issues such as constipation, diarrhea and other common conditions related to faulty digestion can be remedied via ginger beer, thanks to the probiotics it contains.

Sodium is an electrolyte that is crucial for the body’s proper functioning. Although ginger beer by itself cannot fulfill the need for sodium altogether, when consumed in addition to a varied and balanced diet with sufficient salt in it, ginger beer can serve as an additional source of sodium for the body.

18. A Source Of Amino Acids

Amino acids, which function as a core building block toward the production of vital protein in your body, can also be found among the many healthy properties of fermented ginger beer. A vital part of global health, amino acids also help regulate serotonin levels, which in turn contribute to preventing mood swings and mental health issues.

19. It Can Help Regulate Nausea

The soothing taste and aroma of ginger beer would warm your stomach up, thus inhibiting nausea on the spot. It is powerful enough as a remedy against nausea, so that no further medical products may be needed for treating this issue. However, nausea as a symptom should always be observed and noted with your physician, should there be any other underlying medical issues it might be associated with.
(https://www.ncbi.nlm.nih.gov/pubmed/10793599)

Due to the characteristics mentioned previously, including its ability to treat nausea, prevent headaches and regulate mood swings, drinking ginger beer is especially positive and recommendable for pregnant women who find themselves suffering the effects of so-called morning sickness. It would ultimately help boost the immune system of both the mother and the baby, and become an enriching part of their diet.
(https://www.ncbi.nlm.nih.gov/pubmed/22951628)

21. It Can Assist With Proper Digestion

Problems caused by a lack of digestion, such as diarrhea, constipation, nausea, etc. are all easily treated by the many healthy qualities of ginger beer. By warming the stomach, soothing the mind and relaxing the circulatory/ respiratory systems, it would effectively boost the digestive system as a whole. Chronic indigestion can also be well treated or prevented by its regular use.
(https://www.ncbi.nlm.nih.gov/pmc/articles/PMC3016669/)

22. A Powerful Help For Weight Loss

For those looking to lose weight and/or lower their cholesterol levels, ginger beer is ideal, because it helps decrease the sensation of hunger when consumed regularly. Thus, it serves very well as a reinforcing element for weight loss programs and diets.

23. It Can Help Reduce Cholesterol Levels

Ginger beer has been shown to have a positive effect when it comes to decreasing the levels of negative cholesterol in the bloodstream. It should, however, not be the only treatment taken to remedy high cholesterol, and should always be consulted with a medical professional first in these cases.
(https://www.ncbi.nlm.nih.gov/pubmed/10801908)

As a result of its potent properties as an anti-inflammatory and a digestive aid, ginger beer can help, effectively, in reducing the symptoms and painful sensations caused by menstruation.
(https://www.ncbi.nlm.nih.gov/pubmed/26177393)

25. It Can Also Act As An Analgesic

Ginger beer can act as a powerful painkiller for anybody recovering from illness or injury who is suffering from physical pain or discomfort. Its use should be consulted with your physician, for safety. But in general, consuming ginger beer will certainly help with managing, reducing and preventing physical pain across the entire body.
(https://www.ncbi.nlm.nih.gov/pmc/articles/PMC3518208/) 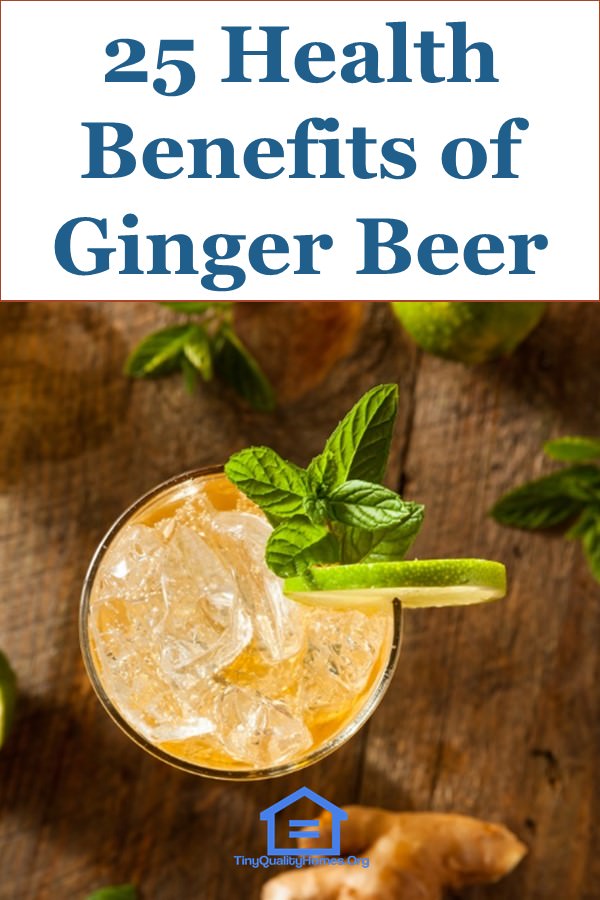