Yaupon tea is the only naturally-occurring caffeine source that is native to the US. It also has similar active ingredients and nutrition as yerba mate tea.

Below are various benefits of yaupon tea;

Yaupon Leaves contain theobromine (C7H8N402, or 3,7-dimethylxanthine, or 3,7-Dihydro-3,7dimethy1-1H-purine-2,6-dione) a methylxanthine and very similar to caffeine. Theobromine is an energy booster without the unnecessary side-effects generally produced by caffeine.

Since theobromine has three methyl groups instead of the two in caffeine, it is much slower in leaving the body and subsequently has a longer effect. Instead of working through the central nervous system (like caffeine), theobromine works as a muscle relaxant of the smooth muscle tissues. Caffeine also acts as a vasoconstrictor (tightens blood vessels) while theobromine is a vasodilator, which can reduce blood pressure and add to the mood-improving effects.

Yaupon Holly leaves contain polyphenols, which are secondary metabolites of plants. Several studies have shown the anti-diabetic effects of polyphenols. Polyphenol-rich teas, like Yaupon, may have an effect on glycemia through different processes, including the inhibition of glucose absorption or its intake by peripheral tissues. They also decrease the intestinal transport of glucose and delay the transfer of glucose from the stomach to the small intestine.

Theobromine, in yaupon leaves, has been shown to prevent the demineralization of enamel and can promote the growth of new enamel. Theobromine can repair and re-mineralize exposed dentin (what your teeth are made of below the enamel). If enamel erodes, the dentin is exposed which causes hypersensitivity. It also has been proven to work better than fluoride at repairing lesions in enamel. Theobromine also makes teeth less susceptible to bacterial acid erosion that could lead to cavities.

Theaflavins and thearubigins, the bountiful polyphenols in yaupon tea, possess strong chemopreventive properties. Yaupon Holly leaves contain phenolic acids and flavanols that have been shown through numerous studies to possess both, anti-inflammatory effects and chemopreventive elements in colon cancer. Colon cancer is one of the primary causes of premature deaths worldwide and malignant alteration of normal colonic cells may be caused by chronic inflammation.

Polyphenols also have been observed to protect cells against cytotoxic and carcinogenic chemicals. They have an inhibiting effect on human cancer cells and cause a reduction in the growth of tumors. Furthermore, it has been demonstrated that polyphenol-rich teas inhibit the conversion of high-grade PIN lesions which are also cancer causing.

Yaupon tea is rich in antioxidants. Antioxidants are highly beneficial in promoting immune system health. They increase the production of white blood cells, antibodies, interferon (which basically protect your cell surfaces, reducing the entry of viruses), as well as hasten healing. Antioxidants also increase B cells, which make antibodies react to and attack specific germs.

Several studies have shown that the consumption of polyphenols, prevalent in Yaupon leaves, reduce the risk of coronary heart disease, as they are powerful inhibitors of LDL oxidation. LDL oxidation is well established as a direct factor in cardiovascular diseases and a major component in the progression of atherosclerosis.

It has also been observed that polyphenols inhibit the infiltration and production of the smooth muscle cells in the arterial wall, a process that may result in the reduction of the formation of an atherosclerotic lesion. Polyphenols may also make use of antithrombotic effects by way of inhibiting platelet accumulation.

Polyphenols, in yaupon leaves, can also recover endothelial dysfunction related to various risk factors for atherosclerosis which precedes the formation of plaque. Drinking teas containing polyphenols increase artery dilation, which also counteracts the endothelial dysfunction caused by regular high-fat consumption. Long-term intake of this kind of tea has been found to lower blood pressure. Several epidemiological studies have shown that the consumption of polyphenol-rich teas has also been connected to a lower risk of myocardial infarction.

Polyphenols also exhibit an effect on the secretion processes of inflammatory cells. They inhibit enzymes associated with pro-inflammatory properties which decrease inflammation. Polyphenol-rich teas, such as yaupon tea, can improve the activity of non-enzymatic and enzymatic antioxidant defense systems by foraging oxygen-free radicals which also reduces inflammation.

Yaupon Holly is grown and harvested in North America which serves as an alternative economic opportunity to caffeine. Coffee is our leading source of caffeine and subsequently is at the center of trade relationships between North and South America.

There are several studies that show unequal trade relationships between North and South America and it is no surprise that coffee production and trade is full of socio-ecological exploitation. A native caffeine source can alleviate this issue associated with the consumption of coffee and other caffeinated beverages. Choosing Yaupon tea can relieve the stresses of potentially contributing to these exploitative trade mechanisms and increasing transparency in the supply chain. Buying domestically harvested products also encourages local job creation which benefits the economy.

Yaupon tea can also aid in digestion. Since the theobromine in Yaupon tea works as a muscle-relaxer for smooth muscle tissue, it can alleviate symptoms of IBS. The polyphenols in Yaupon tea also contribute to good gut health. They eliminate bad bacteria and promote the production of good gut bacteria acting as a pro-biotic type substance. Polyphenols have also been shown to inhibit the growth of Clostridium histolyticum, a pathogenic bacterium, and repress the growth of Clostridium perfringens, Clostridium difficile, and Bacteroides.

The high contents of antioxidants make yaupon act as an efficient metabolism booster. Toxins are stored in fat cells and a lack of antioxidants can cause your body to hold onto the fat you are storing as a defense mechanism to keep from releasing these toxins in the body.

Antioxidants detoxify your body and allow your metabolism to speed up by burning these fats. Toxins can also affect neurotransmitters that deal with hormone regulation and appetite control. Yaupon holly enhances the way your body burns fat and it is recommended for people who want to lose weight. 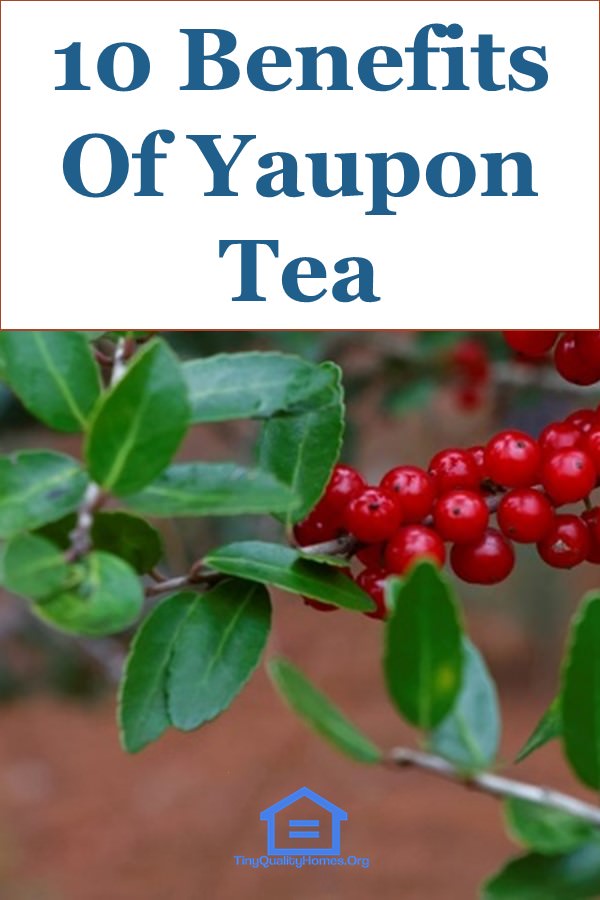