Radicchio (Cichorium intybus) is a perennial herbaceous plant and a high-demand variety of chicory. Radicchio is sometimes called Italian chicory as various variety of its cultivar originate from Italy.

Radicchio varies in size but are typically the size of a grapefruit and have a maroon or red color with white veins.

Radicchio could be eaten raw, steamed, or grilled. It is often eaten alongside other vegetables, pasta, and fish dishes.

Below are various health benefits of radicchio;

If you are looking for a natural ingredient that would provide your body with a lot of nutrition and a very small percentage of calories, then radicchio is your best choice. Radicchio leaves contain about 20 calories. This leafy vegetable provides our body with great amounts of vitamin K, vitamin E, vitamin C and moderate amounts of folate, copper, and dietary fiber. It also does contain omega-3 and omega-6 fatty acids which help managing heart diseases.

Most chronic diseases, such as cancer, are better prevented than treated. Prevention by use of a natural diet is regarded as an effective way to avert its risks. Radicchio vegetable contains polyphenolic compounds, such as lutein and zeaxanthin, which reduce the levels of oxidative stress thus lowering the risks of cellular mutation which, in turn, leads to cancer development.
(https://www.ncbi.nlm.nih.gov/pmc/articles/PMC3771420/)

Radicchio has several qualities which are beneficial for the heart. Unlike other food choices that we make wrong, radicchio contains a moderate amount of dietary fiber that helps in reducing the amount of cholesterol in the body. It also triggers increased bile production which also works to reduce cholesterol in the body. Furthermore, radicchio aids in the cleaning of blood by removing harmful toxins thus maintaining an efficient circulatory system.

Radicchio contains polyphenolic compounds, such as lutein and zeaxanthin, which have been widely researched for their beneficial effects on eye vision. These natural compounds prevent macular degeneration and development of cataracts in the eyes. Lutein also acts as a shield protecting the eyes from UV rays produced by the sun.
(https://www.ncbi.nlm.nih.gov/pmc/articles/PMC6164534/)

The amount of mineral density present in human bones is what prevents one from suffering from bone-related diseases. Radicchio contains calcium and vitamin K which keep the bones healthy and prevent diseases such as arthritis and osteoporosis. Vitamin K is also responsible for high absorption of calcium into the body.

Radicchio vegetable is known to contain moderate levels of fiber and with its regular consumption, it helps in preventing symptoms of constipation, bloating and flatulence. This leafy vegetable spurs the normal body digestion by kickstarting the peristaltic motion that aids food digestion. Proper food digestion would ensure high absorption of minerals and vitamins thus providing the body with enough nourishment.

Radicchio vegetable can control diabetes naturally by regulating blood sugar levels with the aid of inulin present in its white-veined red leaves. Unlike other vegetables, the sugar content, present in radicchio, is very low making it a good choice for people suffering from diabetes. Regular consumption of this vegetable would maintain your blood sugar level and also prevent any other related diseases.
(https://www.ncbi.nlm.nih.gov/pmc/articles/PMC4488567/)

Radicchio contains a high content of vitamin K that ensures that the neurons in the brain are healthy. Vitamin K is also responsible for the prevention of diseases like Alzheimer’s disease which may cause brain damage. This leafy vegetable also contains omega-3 and omega 6 fatty acids which also play a vital role in nourishing the brain cells.

A research conducted in 2016 showed that; regular consumption of radicchio vegetable has an effect on roundworms as it causes them to die. Roundworms which reside in the stomach and the small intestines are known to cause various internal harms along the digestive tract and this would be an effective natural way to inhibit them.
(https://www.ncbi.nlm.nih.gov/pmc/articles/PMC3860133/)

Anemia is a disease caused due to lack of enough iron in the body. A 100 gram of radicchio provides your body with up to 0.6mg of iron. This is approximately about 35% of iron which one is supposed to take daily. Adding radicchio to your diet would nourish the red blood cells and the hemoglobin which is responsible for oxygen transportation throughout the body. Radicchio can, therefore, be used as a prevention and treatment for anemia.

Since ancient times, radicchio has been known to have analgesic and sedative effects when a Roman philosopher once displayed its therapeutic qualities. It is known to treat insomnia and purify intoxicated blood. Radicchio also contains a component known as lactucopicrin which acts as an anti-malarial agent.
(https://www.ncbi.nlm.nih.gov/pmc/articles/PMC3860133/)

If you are planning on joining the gym classes so as to reduce your body weight, this leafy vegetable would also be of great help. According to research, high consumption of fiber keeps the fat away. Radicchio has a moderate fiber content that aids in bringing satiety as well as smoother digestion and excretion. Presence of fiber in your stomach gives your body a feeling of satiety thus preventing you from over-eating.

Radicchio contains the entire spectrum of B-complex vitamins that aim in replenishing your skin, eyes, and nails giving them a lovely look. These vitamins are important for vital processes such as energy conversion. The compound, folate, is responsible for optimal red blood cells.

Researches have shown that consumption of radicchio vegetable stimulates the functioning of the liver thus speeding the process of toxic waste elimination from the body. This helps in protecting the body from liver-related diseases.

Radicchio contains vitamin C which boosts the body’s immunity since it acts as an antioxidant that promotes quicker healing of wounds and detoxification. This vitamin is also responsible for promoting a healthy stomach environment and builds collagen tissues.

Radicchio vegetables contain phenolic antioxidants such as zeaxanthin and lutein which are known to filter UV rays from the sun thus offering protection against age-related macular diseases.

Radicchio triggers an excessive production of bile which helps in reducing cholesterol thus benefiting the heart health. Radicchio leaves obtain their color from compounds present in the plant such as Ellagic acid and quercetin. These compounds play a vital role in regulating blood pressure in the body. Another phytonutrient present in radicchio is lycopene which helps in reducing Low-Density Lipoprotein (LDL) that is responsible for causing increased blood pressure. 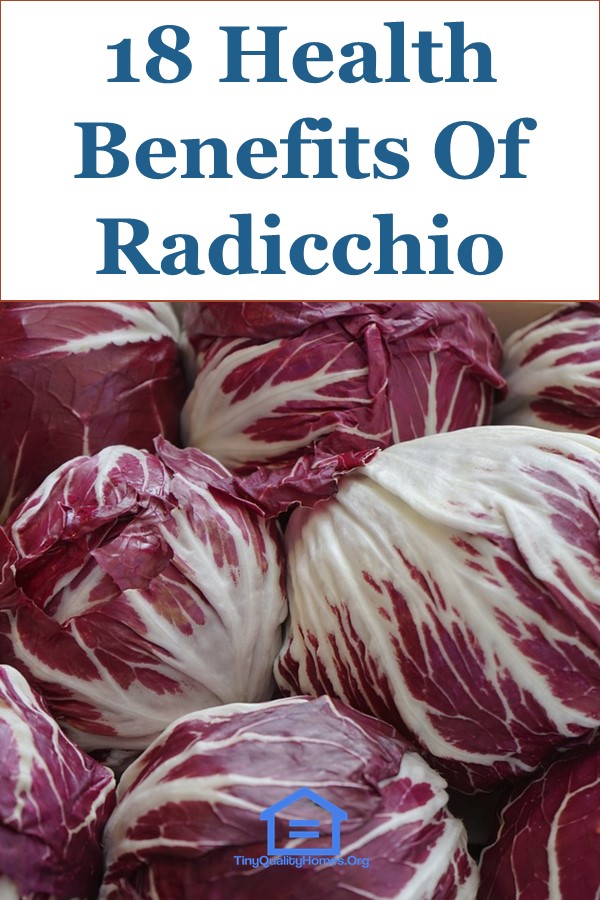