There are 6 species of moles living in North America. The most common mole garden pest among them is the Eastern Mole (Scalepus acquaticus).

Controlling moles in your garden may not be necessary as they are insectivores and do not eat plants. However, their burrowing activities may damage the roots of plants in your garden.

Some good practices to get rid of moles include;

Below are 17 home remedies and natural ways to get rid of moles;

If you are looking for a sure way to remove moles from your yard, live traps could be the best option available. You may place cages with a bait near the burrows or the place where you notice mole activity.

Another way to trap the moles is placing a glass jar or glass bucket under one of the tunnels in a way that the mole will fall in it while moving through the tunnels. Once inside the glass jar, it will not be able to come out. You may then take the mole and free them in a faraway place.

If you have a lot of grubs in your lawn such as Japanese beetle grubs, it could be difficult to get the moles to leave their current abode. This is because these grubs serve as food for moles.

The first thing you may need to do is to get rid of the grubs by using milky spore, lawn aerator sandals or beneficial nematodes that help in eliminating them.

Setting up an underground fence around the perimeter of your lawn or yard is a great way to prevent the entry of moles in your property. Make sure the fence is deep enough to make it difficult for the mole to dig under it and enter your garden. Ideally, it should be 2 feet deep to keep them away.

It is difficult for moles to dig through gravel and they will stay away from your place if you set up a barrier with gravels. All you have to do is mix some soil and gravels and spread it under the ground around the perimeter of your yard.

No animal will make home in your garden if there is no food for them. So, one of the best ways to get rid of pests and moles is to completely eliminate their food source.

Moles like to feed on soil dwellers such as earthworms, slugs, and other worms. Eliminating them from your garden will automatically reduce the mole nuisance.

Fish emulsion is a great mole repellent. The bad smell will surely deter the moles from your garden.

Moreover, it acts as a fertilizer to the soil making your garden more fertile. Watering your lawn with fish emulsion 2-3 times a week will keep them away.

If you have a cat at home, you can use its poop to keep moles out of your lawn. They would sense the danger of their predator near their tunnels and try to find a better place to thrive. Thus, leaving your property. Try to collect the cat waste and dump it near or inside the burrows.

POPULAR:  19 Home Remedies & Rat Repellents To Get Rid Of Rats

The spicy cayenne pepper, when sprinkled on the ground, may change the taste of the organism on which moles are feeding. This may irritate them and make them leave your place.

If cayenne pepper is not available, you may mix some Tabasco sauce (as it contains a lot of pepper) with water to sprinkle near and around the mole tunnels.

Ultrasonic repellents specially designed to deter moles can be used as another home remedy to ward off the pest in an excellent and easy way.

Devices such as sonic mole chasers produce an underground sonic sound that is highly disliked by the moles. They get irritated and move to another place to reside in peace.

No matter how strange it may seem, dryer sheets can be used to get rid of moles. The animal does not like the smell of oleander which is commonly used in these sheets and placing them near the entrance of the tunnels will surely repel moles.

Just like any animal, moles are threatened by their predators such as owls and cats. In addition to putting cat litter near the burrows, you may consider attracting owls to your garden by placing bird nest boxes. It will help owls make frequent visits in your garden preying on the moles you want to get rid of.

Dogs are also good predators of moles and can be helpful in killing the moles. Thus, reducing the damage to your garden caused by moles.

Moles dislike the smell of castor oil. The oil irritates the mole’s skin causing itching. All you need to do is just combine half a cup of castor oil with equal amounts of liquid dish soap and add this to a gallon of water. Now locate the spots where you see the moles and spray the area with this solution.

One of the natural ways to ward off moles from your garden without causing any harm to them is to plant more species of plants that repel the animals. For example, planting garlic and allium bulbs throughout your garden will annoy them and deter them.

If there are too many active mole tunnels in your garden, where they tend to hide easily, consider flooding the tunnels with water. Just insert the other end of water hose in it and turn on the tap. It will fill the tunnels with water making the moles come out. As you see them coming out, you can catch them and relocate them to a distant place.

Moles feel suffocated when dry ice is placed in their tunnels. Dry ice displaces oxygen with carbon dioxide making it difficult for moles to breath. Dropping dry ice pellets is, therefore, one of the best home remedies to deter them.

One of the reliable ways to check the population of moles in your garden is to place specially designed battery powered vibrating devices in the soil near the tunnels. They will work well until their batteries discharge and helps you to get rid of moles.

The strong smell of coffee around the burrows and tunnels will naturally help in repelling the moles while making your soil more fertile.

Coffee is high in potassium and nitrogen that helps plants grow better while the strong scent irritates the moles and other insects that are causing nuisance in your lawn. Just soak some coffee grounds in water and spread the mixture around your garden, especially in the tunnels. 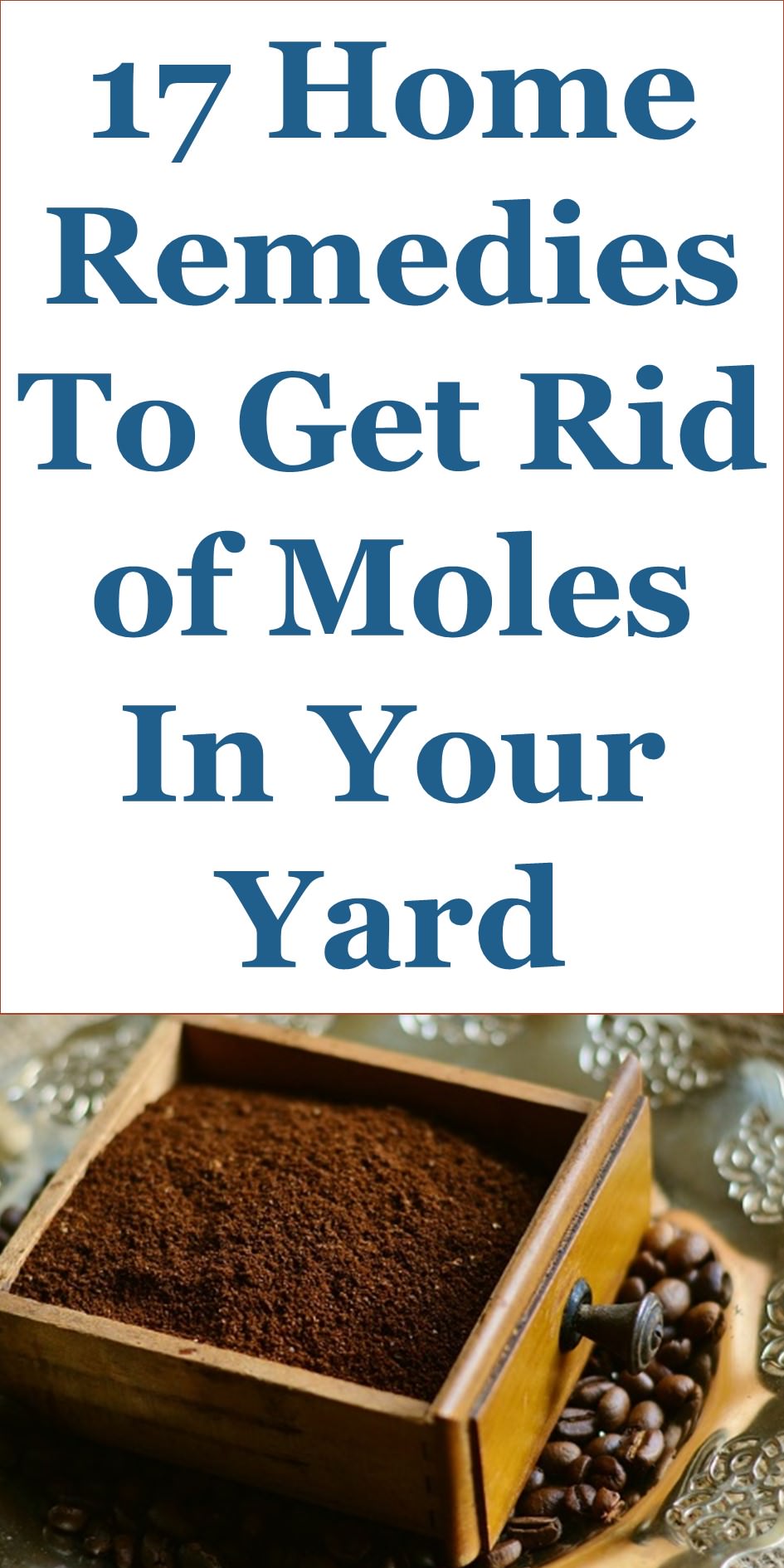