24 Home Remedies And Repellents To Get Rid Of Stink Bugs

Brown marmorated stink bugs, also known as Halyomorpha halys, or simply stink bugs are often seen in warm spring and summer periods of the year. They feed on fruits such as berries and peach. They are not harmful to humans but do ooze out a nasty smell when they are squeezed.

Here are some good practices, to consider, when dealing with stink bugs;

Below are 24 home remedies and natural ways to get rid of stink bugs;

The most effective way to get rid of stink bugs is blocking their entry into your house. Seal all the gaps around doors, window, lights and exhaust fans. If keeping doors and windows open is necessary, consider covering them with screens that check the entry of insects while allowing air and light to pass.

Sticky traps are excellent for catching flying insects around the home. The bright colored sticky strips of paper can be hung in the garden and entrances. You can easily get one at a pest control store near you. Just hang it in places where you notice stink bugs. They will get attracted to the bright color and will fly onto it. As a result, they get stuck and die.

POPULAR:  25 Quality Home Remedies To Get Rid Of Blackheads

Soap and water is another great home remedy to kill the stink bugs. If you see a stink bug crawling on the window pane, wall or in your curtain, just prepare a soapy water by mixing some liquid soap to some water in a bucket. Place the bucket underneath the insect and knock it with the help of an object such as a broom or a stick. As soon as they fall over the soapy water, they get drowned and die.

Diatomaceous earth is obtained from fossilized diatom and is non-toxic to humans. However, it acts as a potent pesticide killing insects and pests in a natural way. Sprinkle diatomaceous earth in the areas visited by the stink bugs. The white powder has a dehydrating action on them. As soon as they come in contact with it, their exoskeleton is damaged resulting in death.

Nicotine acts as a poison for the stink bugs and is a great home remedy to get rid of them. Just warm 1 gallon of water and empty a pack of cigarettes in it. Let it soak for some time until the water turns dark. Strain the liquid and, to it, add 2 tablespoons of liquid dish soap. Fill up a spray bottle with it and spray it directly on their body. The soap helps the solution to stick to their body for longer while the nicotine poisons them effectively.

One of the best ways to prevent a stink bug infestation is to get rid of their eggs. These bugs lay their eggs at a warm temperature usually around the spring. The eggs are present on green leaves of trees and plants. Look around your garden and find out their eggs. Trim your plants and discard the eggs carefully. You may also drown the eggs in a soapy water to kill them.

Neem oil is a great insecticide and helps in killing many insects and pests. Mix neem oil with water and fill up a spray bottle with this solution. Use this spray to get rid of the stink bugs from your garden and home. Since neem oil does not cause any harm to plants, you may spray it in your garden to get rid of eggs and adult bugs.

Stink bugs are attracted to damp fabric. Put a towel in water so that it completely soaks the water. Remove excess water from it and hang the towel outside your home preferably in the evening. All the stink bugs around your house would gradually fly onto it. Carefully, take the towel with the bugs attached to it in the next morning and dip it in soapy water. They will die due to drowning.

POPULAR:  13 Quality Home Remedies To Get Rid Of Scalp Acne And Pimples

Stink bugs detest the smell of garlic. As such, garlic repels them away from your house. Make a garlic solution using garlic powder and water. Put it in a spray bottle and spray the effective insect repellent in your garden, around your house, and near entrances. This would prevent stink bugs from entering your home.

Vacuuming the bugs is an excellent way to get rid of them unless you have a problem with a smelly vacuum cleaner. To prevent the vacuum cleaner from smelling, however, try tying an old stocking in the mouth of the vacuum cleaner with the help of a rubber band. Now push the stocking inside. The bugs will get collected in stocking and you can remove it, seal it and throw it away in the trash.

The strong smell of catnip naturally deters the stink bugs. Therefore, planting catnip in your garden will keep them away. Alternatively, you can also sprinkle catnip powder in heavily infested areas to get rid of the bugs.

If you want an easy way to deter the stink bugs, use rubbing alcohol. It repels them in no time and prevents them from entering your house. Add rubbing alcohol and water to the ratio of 1:2 and put this solution in a spray bottle. Spritz it directly on their body to irritate them and they will leave your home immediately.

Wart remover freezes the stink bugs in the same way as it freezes any warts. Spray it directly on their body. Once they get frozen, you can dispose them to get rid of the bugs.

Pyrethrum is toxic to the stink bugs and is effective in eliminating them from your garden. Take some dry pyrethrum flowers and crush them to obtain a powder. Mix this powder with water and a few drops of liquid dish soap. Spray it around the plants to protect them against the bugs.

You can make an excellent bug repelling spray using lemon juice and vinegar. Just take a bowl and pour one ounce of lemon juice. Then add half an ounce of vinegar and mix well. Spray this mixture on the walls, access points, gaps and cracks to deter these pesky little insects.

Stink bugs hate the smell of peppermint and get repelled by it. Add about 10-12 drops of peppermint oil in two cups of water. Pour it in an airtight spray bottle. Use this to spray on the affected areas every day until you see all of them moving out of your property.

If nothing else is available for you to repel them or kill them, you may try picking them up. This is only possible if the infestation is not severe. Just hold them lightly with a paper towel and flush them down your toilet. Avoid pressing them too hard as they will release their annoying smell that you are trying to avoid.

Hairspray tends to paralyze the stink bugs effectively. Spray it directly on their bodies and once they get disabled, you can pick them and put it in a plastic bag. Seal the bag and throw it in the trash.

If you want to get rid of stink bugs for a long time, try out this remedy. Chop some onions, peppers, and garlic and add them to a pot with a cover. Fill the pot with a reasonable amount of soapy water and let it sit for a day. Extract the liquid by straining the content of the pot and fill the solution in a spray bottle. This homemade pepper spray works for about 2 weeks to keep stink bugs away from your house.

POPULAR:  How To Get Rid Of Dark Neck - 17 Effective Home Remedies

You could install door and window screens to keep out all types of insects and pests, including stink bugs, from your house while enjoying good ventilation of your home. Ensure you invest in good quality screens that would not be easily damaged by pests and severe weather conditions.

Mix a tablespoon of chili pepper powder with a cup of water. Then, add a little liquid soap to the mixture. Pepper is capable of killing stink bugs by burning their exterior structure causing them anguish and death. Adding liquid soap makes the mixture stick to their body more effectively.

POPULAR:  25 Quality Home Remedies To Get Rid Of Blackheads

The strong smell of essential oil is soothing to humans but is an effective repellent for bugs and insects including stink bugs. As such if you have any of the numerous essential oil, such as anise oil, cedarwood oil, basil oil, etc, you could dilute them with water and spray around your home and garden.

Alcohol, such as vodka, makes for an effective insecticide for killing stink bugs. Dilute alcohol with water and put this mixture in a bucket or jar. When you see any stink bug, just pick them up and drop in the jar or bucket and see them die. You could use bleach instead of alcohol for this remedy.

You could also use ammonia, just like you use alcohol, to kill or repel stick bugs. The ammonia smell is capable of repelling the bugs. Also, if the bugs come in contact with ammonia solution, they would die. 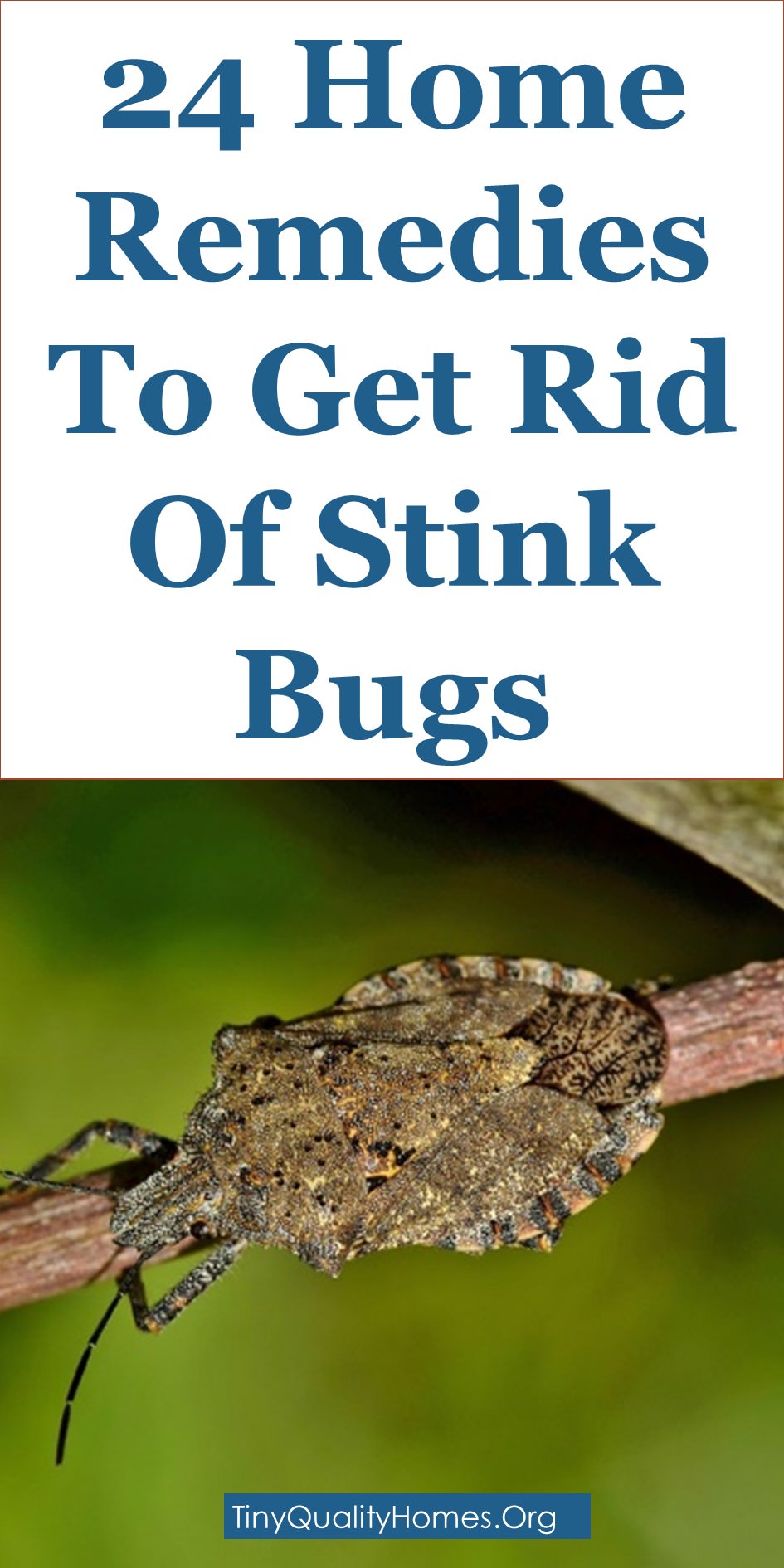