Burping is the bringing up of air from our upper digestive tract especially the esophagus and the stomach. Burping is also called belching or eructation. It is often accompanied with a distinct sound and may also be odorous.

Burping is a normal process as it typically expels air from the stomach.

The gas in the stomach, that may subsequently lead to burping, could be a source of abdominal pain and bloating.

Belching may be caused by;

Furthermore, symptoms such as heartburn, nausea, and dyspepsia may be relieved by belching.

POPULAR:  17 Quality Home Remedies To Get Rid Of Gingivitis

Depending on the cause, burping may last for too long and may be very forceful.

Here are some tips and good practices to consider, if you are dealing with excessive burping;

Below are various home remedies for excessive burps;

There is no better remedy for burps and belches than water. Water helps in alleviating numerous gastrointestinal challenges. Drink 10 to 14 glasses of water a day in order to get rid of burping. Water can also be used alongside numerous other home remedies, that are mentioned above, to stop burping. Also, avoid consuming carbonated beverages as well as alcoholic beverages as they release carbon dioxide gas.

The bio-active compounds present in green leafy vegetables play an effective role in reducing burping. The oxalates, present in mint and spinach, are vital for gastrointestinal health. Furthermore, the antispasmodic properties of spinach and peppermint inhibit the activities of gas forming bacteria in the digestive tract. The use of green leafy vegetables is also recommended for stomach acidity, stomach bloating and other gastrointestinal problems. The calcium content of mint keeps the colon and intestines healthy.

POPULAR:  How To Get Rid Of Vaginal Odor- 46 Effective Home Remedies

For this remedy, take one tablespoon of dried mint leaves and add one glass of water. Then, boil the water for 5 minutes. Strain and drink it when it cools. Use this remedy daily until the excessive burping dissipates. You can also use spinach in your meals in order to get its anti-burping effect.

Citrus fruits are effective in stopping excessive burping. These citrus foods include lemon, orange, lime, and grapefruit. All citrus containing foods are also rich in the pectin. The pectin and vitamin C, in citrus fruits, keep the stomach and colon healthy and help in the proper digestion of food. Furthermore, the antioxidant properties of citrus fruits also help in inhibiting gastrointestinal problems. For this remedy, take one tablespoon of lemon juice and mix it well in a cup of lukewarm water. Drink it 30-60 minutes before breakfast. Doing this daily would reduce your burping situation.

POPULAR:  25 Effective Home Remedies To Relieve Back Pain And Backache

Yogurt is a probiotic food and its helpful in reducing a burping situation. The active bacterial agents in yogurt are effective in reducing the gas-causing bacteria in intestines. These bacteria, in yogurt, make immune system strong against harmful bacteria that cause digestive problems.

Yogurt can be taken with meals. However, for more effective results, take a cup of yogurt and add one tablespoon of olive oil in it and consume it early in the morning. This remedy is effective because, in the morning, a large proportion of gas-causing bacterial agents are active. The probiotics, present in yogurt, would inhibit these gas-causing bacteria, thus, reducing the likelihood of burping.

The use of herbs for digestive problems is as old as man. There are many kinds of herbs that are used for different digestive problems, but the herb, named Chamomile, is really outstanding for treating excessive burping situations. Chamomile has potent antibacterial and antioxidant properties which makes it effective for reducing bloating, indigestion and burping situations. Chamomile is available in the form of teabags. For this remedy, take a teabag of Chamomile and put it in one cup of boiled water. Leave it for 5 to 10 minutes and remove the teabag. Drink this tea two to three times a day.

Ginger is beneficial for treating numerous gastrointestinal issues. Take a glass of hot water and put one tablespoon of sliced ginger in it. Then, leave it to steep for ten minutes. Drink the resulting ginger tea 2 to 3 times a day.

Cinnamon is another effective remedy used for reducing excessive belching. Cinnamon is capable of reducing stomach bloat and constipation. For this remedy, take two glasses of water and add one tablespoon of cinnamon in it. Boil the water until the color of water changes. Then, remove it from the flame, leave it to cool, and drink it three times a day.

POPULAR:  21 Home Remedies & Cockroach Repellents To Get Rid of Cockroaches

Anise seeds have been used since ancient times to stop or inhibit excess burps. Anise seeds are rich in polyunsaturated fatty acids that help inhibit gas-causing agents in the stomach. You can take anise by boiling with water and it can also be chewed in its whole form. If you want to take it with water, then take a glass of water and boil it along with anise seeds. After boiling, cool it for ten minutes and then drink this water. Repeat this process two times a day.

Just like the peppermint and other green leafy vegetables, the use of basil leaves is also very effective for reducing the burping situation. Take a few basil leaves and wash them thoroughly. Then, chew them once in the morning and then in the evening. The juicy content of the leaves reduces the burping.

The use of watermelon helps in the restoration of the digestive system to good health. You can eat watermelon two times a day to help relieve excess belching. The antioxidant content of watermelon plays a great role in reducing burps and belches. For this remedy, take a watermelon, cut it into small pieces and refrigerate it. Eat the watermelon, from time to time, throughout the day.

You can eat banana two or three times a day. The carbohydrates and pectin present in banana reduce the burping situation. You can also take two bananas, crush them, and then mix them in yogurt. Eat this mixture two times a day.

Asafetida reduces the acidity of the stomach and also helps to clear out waste materials from the intestines. Take a tablespoon of asafetida and mix it in warm water. Drink it two or three times a day.

Black tea is also effective in stopping burps. The tannins, catechins, and other phytochemicals, present in black tea, can stabilize your digestive system and inhibit burps. For this remedy, take a cup of boiled water and put a black tea bag in it. After 5 minutes, remove the bag and drink the tea. You can also add lemon to it.

The antioxidant and anti-flatulence properties in garlic inhibit the gas-causing action in the gastrointestinal system. Take one tablespoon of garlic paste and mix it in lukewarm water. Then, drink this water twice a day.

Flaxseed is also very helpful in stopping excessive burping. Clean the flaxseed and then grind it. Take one tablespoon of flaxseed powder with a glass of water, juice or milk. Repeat this process two times a day, till you get your desired result.

POPULAR:  17 Quality Home Remedies To Get Rid Of Gingivitis

The calcium content, present in pomegranate, reduces the gas and bloating. Take pomegranate, two times a day, just like any other fruits.

Pulses and legumes are gas-causing foods. These foods should be avoided in order to stop burping. The starch (raffinose), present in legumes, causes gas and burping. So avoid legumes and pulses to reduce your likelihood of burping. 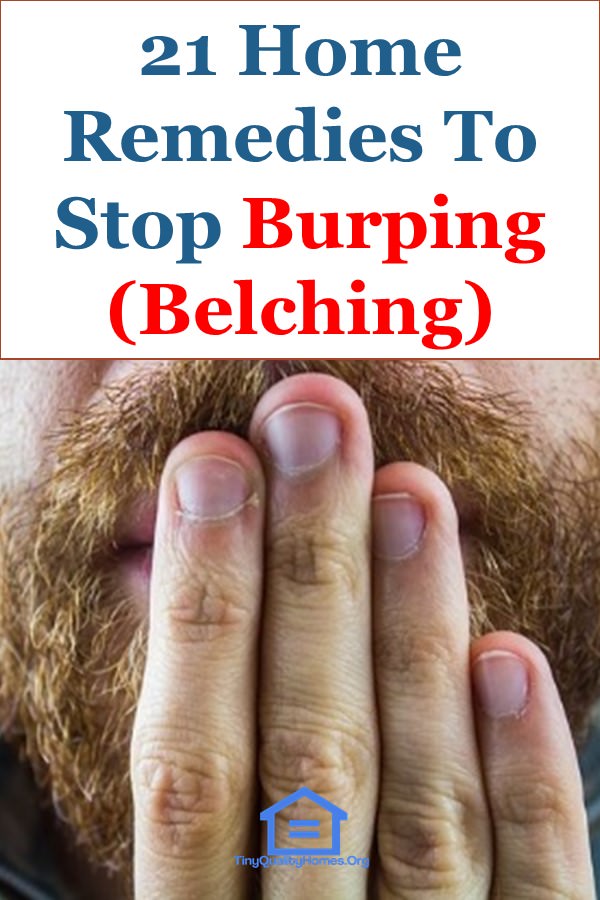